January & February are our coldest months. Usually in the 50’s or 60’s for the high with few clouds. Temps sometimes reach the 70’s on a rare spectacular day, with little or no wind. Winds can be high some days from the North, causing rough water well offshore (known as “elephants marching” because it is humpy on the horizon). We usually have a few nights of freezing but usually not more than a couple of nights in a row. Snows lightly about every 20 years or so. The beaches are mostly deserted, windy, and brilliant with clear, cold waters. Not unusual to see a snowbird or 2 swimming. Lots of slow-driving, silver-haired snowbirds consider this the best time of year to visit with sparser crowds, cheaper rentals, and 2-for-1 dinner specials. They also like to block supermarket aisles, contemplating their next move.

March brings spring breakers and warmer temps, usually in the 60’s & 70’s. Water temps are still too cool to swim for most folks. Not a problem for beer-filled frat boys. The snowbirds begin migrating North. SoWal has an abundance of wildflowers along the roadsides and forests which begin blooming this time of year, and on into the summer. Also keep your eyes open for Blue Lupine, which gives Blue Mountain Beach it’s name. It used to cover the dunes so thickly that sailors said they looked like blue mountains.

April & May days are some of the best all year in SoWal. Humidity is thankfully low with very few thunderstorms or pesky insects. In May we usually see June Grass (seaweed) start to appear which can hamper swimming and fishing. Storms and currents wash it in and out. After a big storm which washes large amounts onto the beach, it will rot and stink up the air for a mile or so inland. But this doesn’t happen very often. June Grass and other seaweeds are possible during any Summer month.  It’s best not to worry about it. If you arrive and find your stretch of beach unswimmable (rare), at worst you might have to find a clear stretch of beach somewhere else. Black, biting flies known as “dog flies” usually coincide with the June Grass and North winds bring them down onto the beach. If there are more than a few, they’ll run you off the beach. Yellow flies (deer flies) also can show up at this time, although they are worse in the hotter summer months, off the beach. An onshore breeze helps keeps the beach free of flies. A common, yet amazing sight is large numbers of harmless Dragon Flies buzzing around the dune line, up and down the beach.

June brings the full onslaught of visitors, most of whom arrive in SUVs from southern cities. Temps are usually in the upper 80’s and the water is warm enough for anyone. Humidity is quite high, and thunderstorms become frequent, particularly in the afternoons.

Hurricane season is from June 1st to November 30th. There is nothing magical in these dates, and hurricanes have occurred outside of these six months, but these dates were selected to encompass over 97% of tropical activity. Peak season is from August through October, with 78% of the tropical storm days, 87% of the minor hurricanes, and 96% of the major hurricanes occurring then. Maximum activity is in early to mid September. Once in a few years there may be a tropical cyclone occurring “out of season” – primarily in May or December. 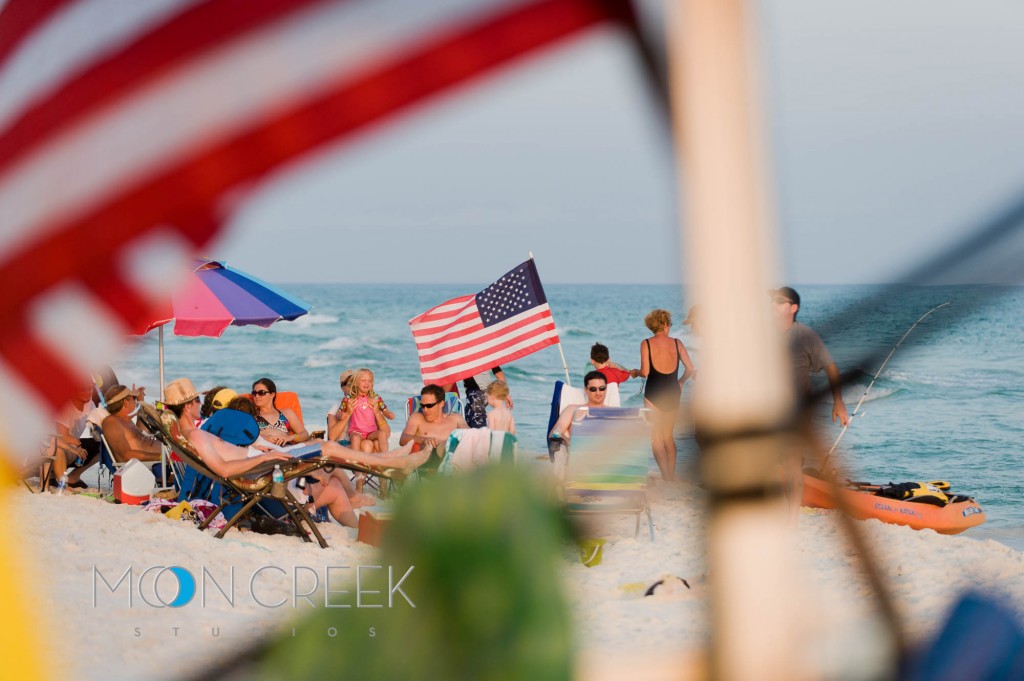 July and August are the busiest months (school’s out!) and the hottest. Temps are usually in the 90’s and humidity is maxed out. In the water or indoors are sometimes the only comfortable spot. Though warm/hot Gulf breezes provide some relief. The 4th of July gets crazier every year. Fireworks, though prohibited, light up the night sky along the beaches in each direction. Most dogs will be terrified. Drinking and fireworks shouldn’t mix but always do.

The very warm water temps can cause red tide to appear. A red tide is a higher-than-normal concentration of a microscopic alga. This organism produces a toxin that can affect the central nervous system of fish. At high concentrations (called a bloom), the organisms may discolor the water. However, red tides are not always red. They can appear greenish, brownish and even purple in color. Or, the water can remain its normal color. Blooms are most likely to occur from August through November although there have been red tides in every month of the year. Swimming in the Gulf with high concentrations of red tide will cause cold or even flu-like symptoms that can last hours or days. A strong red tide and an onshore breeze will cause breathing difficulties, sore throat, sneezing, and coughing several hundred yards inland. A severe red tide will litter the beaches and bayside with dead fish. Learn more at http://www.redtideonline.com.

September is much the same as August, but an occasionally cooler day (80s) is a welcome relief. Thunderstorms are an almost every-afternoon occurrence (as in August and July), and Tropical storm activity is peaked (see June, above). Crowds drop dramatically after Labor day (school days).

October is the best month of the year! It edges out May, because the water is warmer, and there are fewer tourists. Typically, the water is clear, the humidity is low, air temps are in the 70’s & 80’s, insect activity is lower than summer months, and the attitudes of the locals is one of welcome relaxation. The snowbirds have yet to arrive in large numbers.

November and December are becoming more and more popular for vacationers in SoWal. With less activity right around Christmas. The snowbirds have arrived and things are moving slower. Some of the most amazing days happen during these months. It is the time of our brief Fall, with the much-anticipated cold fronts sweeping in. Most days temps are in the 50’s & 60’s, with quite a few (sometimes a week more or less) of spectacular 70 degree, low humidity, clear-air days. The water temps become to cool for most to enjoy. The Tourist Development Council’s marketing efforts are bringing more and more people to the area in the fall and winter months. You’ll have to wait for a table at The Red Bar on any night of the year.